India needs to stop acting like an aggrieved outsider and take up the responsibility that comes with power. Australia needs to understand that its teams are supposed to set an example. For the good of the game, the two have to find a common language.

India and Australia have been going hard at each other for several years. It does not mean a thing. Eventually the warring parties will realise that all this sound and fury is insignificant beside their need to get along. Thereafter they will work towards finding a way forwards founded upon common understanding. After all, these are the two great cricketing nations of the world, the two countries that combine strength with an enduring love for the game, the powerhouses bound sooner or later to take over the show. They are rivals only on the field. Elsewhere they are partners and friends. Just that sometimes, in the hysteria, amidst the bellowing of the bulls, with the wild-eyed nationalists in a frenzy, they forget that they are on the same side.

For many years and in many ways Australia and India have followed a common path. First they had to free themselves from the patronage of the MCC and the old powers in London. Throughout its formative years, and far into its adulthood, cricket was directed by the same people, or their descendants, who seized control of it in the middle of the 19th century – the old guard who tried to keep the game as pure as homogenised milk. Although they hardly realised it, these complacent souls had old-fashioned views on many matters, including class and colour. Cricket has had plenty of rebels but precious few radicals. 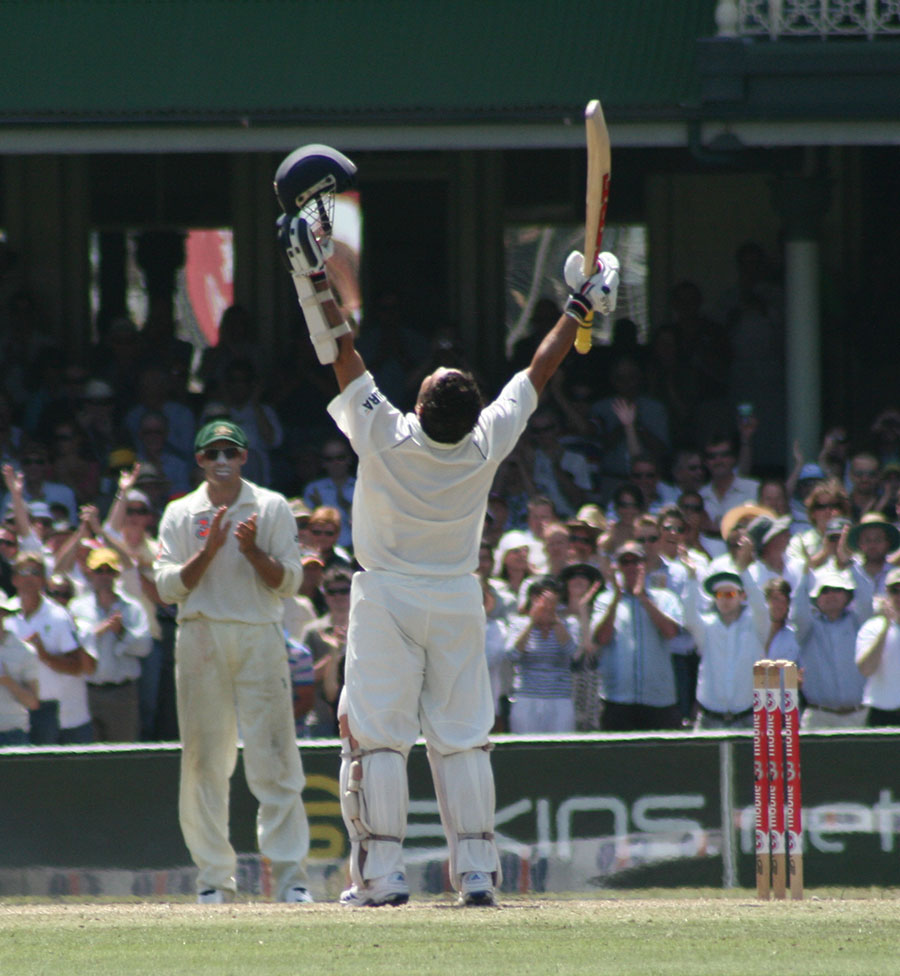 Sachin Tendulkar celebrates his 38th Test century during a match against Australia in 2008. Photo credit: CC BY 3.0 (https://creativecommons.org/licenses/by/3.0)], from Wikimedia Commons

Until the 1850s or so, the English game had two distinct threads: the professionals from Nottingham and the North who went around the country by train playing against local combinations for money, and the gentry from private schools who represented respectability. The professionals wanted to make a living from their craft in the same manner as silversmiths, lacemakers and so forth. Hereabouts skilled labour had started to assert itself. The gentlemen were the products of pulpits, headmasters, and a ruling class determined to retain its position and to bestow its convictions on every nook and cranny of a growing empire. Naturally, the gentlemen prevailed, not least because the professionals were inclined towards drink, besides which, a central authority and a county system were required. Even now workers are few and far between at the MCC, unless a new stand is being built.

For the next 120 years Lord’s dominated the game – and not just its laws – right around the world. Every important international cricketing body met at “HQ”. It was a conservative game. Cricket did not turn against white captains in the West Indies, or apartheid, till an overwhelming case had been presented elsewhere. After the second World War the cricket nations, most of which had fought with the Allied forces as members of the British Commonwealth, gained their independence and embarked upon, or resumed, lives as free nations. For a long time cricket was immune to changes felt in other sections of society. It was a poor game played by a small number of mostly impoverished peoples. Occasionally the game was shown on television but mostly it inhabited a separate world full of memories and sentiments. In India, Pakistan and Sri Lanka, it was played mostly by the upper crust, a group fond of England and its ways.

Of course, cricket could not forever remain the same. Sooner or later, independent nations were bound to demand a share, not so much of the spoils as the decisions. Sooner or later, the days of patronage were bound to end. After all, the game was spreading with democracy and opportunity, and the middle class was growing in all the former colonies. Cricket had been taken up by a new generation that did not look towards London or anyone else with awed eyes; a generation proud of their country and colour and inclined to rely on their own wits; a generation that wanted and needed to make money. Meanwhile numerous books were produced, suggesting that some of the great men of the past were not gods but mere flesh and blood, including WG Grace, Wally Hammond, Ranjitsinhji and CB Fry. The era of the romantics was over. The emperor was not exactly naked, but he had been stripped to sometimes embarrassing essentials.

Among the other important cricket-playing nations, only one had consistently stood its own ground. The Australians had never been impressed with the class system or the old guard or walking or preachers or the English way. There was not much point going so far away merely to reproduce the past. Moreover, it was a harsh, raw continent, full of fires and droughts. Together the land and the history produced a breed of tough and direct men of independent disposition. Accordingly the Australians played by their own lights, displaying a singularity of outlook that made them hard to love and harder to beat. But then Australia had an entirely different story than any of its cricketing rivals. It had no aristocracy to work alongside. It went in cold.

The major change in the last few years has been that other nations have also broken away from acquired habits to assert their individuality and demand their rights. Unsurprisingly, India has been the most outspoken of these newly heard voices. None of the others was well enough placed to stand alone. India had the population and the power. And the money. Australia had met its match.

For a time the Indians merely made an occasional noise. Sunil Gavaskar’s influence was important. Beloved of his people and lauded as a batsman, he spoke out against the cosy assumptions of London, and for that matter, Melbourne. Gavaskar’s weakness has been not that he led the protest, but that, having won the argument, he has not moved on. India has become strong and has no need any longer to act like an outsider. Indeed it has a new responsibility.

And so the Australians and Indians stand tall as cricketing powerhouses. Australia has in recent months started to give some ground to international requirement by moving away from the confrontational approach instilled in numerous backyards, where the game is learned and a thousand friendly taunts are voiced. Hopefully the SCG Test will be remembered as the last instance of the unacceptable face of Australian cricket. Not that they alone crossed the line.

Ricky Ponting and his players had been sorely provoked not so much in Sydney as on their previous visit to India. Sensitivity works both ways. In the last decade India has gained wealth and prestige and its team is strong, intelligent, educated and proud. Whereas Arjuna Ranatunga was seizing the chance presented by leading an unusually gifted Sri Lankan outfit, Sourav Ganguly and his successors have been captaining a side able to take care of itself in any company and likely to remain competitive hereafter. India looks even the fearsome Australians in the eye. Before much more time has passed these nations will learn a common language that goes beyond cricket. Australia will understand that its backyards are unique and that admired sides are supposed to set an example. All the chest beating is passé: the conduct of a new nation eager to flex its muscles and proud of every triumph. India will see that it cannot over-react to every setback as if it were a conspiracy hatched in London and founded upon racist or patronising outlooks.

From the current confrontations will come mutual respect. Sreesanth will realise that he must play the game on his own terms, and that imitating an Australian does not work. The BCCI will stop fighting yesterday’s battles and start thinking about tomorrow. Ponting and his replacement will understand that reputations are hard to change and that rudeness anywhere is intolerable.

In the end love of the game and mutual interest will outlast these disturbances. Ignore the turmoil. The fact remains that Brett Lee is immensely popular in India and Sachin Tendulkar is widely admired Down Under. Supporters have already taken the great leap. Now it is up to those directing cricket operations in both countries to anticipate and avoid conflict. Good manners are needed everywhere. It is time for tongues to stop wagging and ears to start working.

The Most Beautiful Moment the Game has Known