The Peter Roebuck Trust has received various comments and memories of Peter via this website, so we’ve published a selection of them here.

If you’d like to add your own comment or memory of Peter Roebuck to this page, you can do so using the contact form here: add your memory.

A man of profound intellect and knowledge of the game, he demonstrated through his writings the many cultural facets that the modern game encapsulates, from a village green game in Somerset to a tribal game of poor people in Pakistan.
Masood Ahmed

Best cricket writer I have ever read.  I used to go straight to the sports pages of the SMH to read his copy. Was battered by his death and will always remember him with great fondness.  Commiserations, and what a good man.
Dr. A Williams

I am trying to track down an article that Peter Roebuck wrote in the Sydney Morning Herald many years ago where he reflected on the twists and turns of cricket. He wrote: “Cricket is a game that invites numerous twists and turns as giants shrink and minnows grow. Despite the mathematicians, it remains a game of heart and mind and these are places science cannot reach.” I have searched for this article online with no luck. I think he wrote it after Michael Clarke took 3/5 to help Australia beat India at the SCG in 2008….but I am not sure.
He is quite simply the best cricket writer I have ever read and I am deeply disappointed that his opinion is absent from current cricketing circles.
J Hill

A Personal Memory of Peter
I knew Peter from the age of 14 – and his mum and dad (who taught me at Millfield) and I think his brother. I appear briefly in an autobiography of his and in the recently ‘published’ notes written at the time of the Somerset crisis. We kept in touch over the years.
W Le Breton

It never rains… A Cricketer’s Lot
Reading the above. Have read some great books by sportsman but this is the best insight by far. Against some healthy competition this is the most absorbing book of my lockdown. Beautifully written. Hope Peter’s Mother and Family keeping well since I visited them about three years ago. Best.
P Taylor

I got to know Peter initially through my team mate at South Devon CC, Danny Johnson who played with Peter for Devon on several occasions in the late 90’s. I subsequently played with Peter in friendlies and when he asked me to captain development games or local benefit games. He would without fail inform me he fielded at first slip.

I had previously played against Peter when he was at Budleigh and we had always enjoyed the rivalry. From this we became friends and enjoyed nets together at Taunton and then often decamped to his house near the ground for numerous pots of tea surrounded [by] his everyday detritus and cricket paraphernalia. The grass was always overgrown at the front and the back was his ‘nature garden’.

We had worked for some time on me disguising a slower ball which I always seemed to get him out with. So much so it became a self-fulfilling prophecy and one he acknowledged before every game. He was always kind and generous with his knowledge and I was in my 30’s at the time.

Innumerable young cricketers he has helped are not spoken with or been allowed to have their positive view of him expressed widely. I know he has been a positive role model for many young men managing difficult situations or seeking a career in cricket.

Many of those who truly knew Peter know the reality of his life. That he led it in an unorthodox way which often led to one dimensional assumptions and inaccurate assessments of his character and how he chose to live his life. Both of us acknowledged this as his lot in life.

Professionally I never felt compromised with Peter as I had more information than most from which to assess the situation. My role currently is the manager of a Local Authority Child Protection service and one who decides whether professionals are suitable to work with children and young people. There was no sexual risk from Peter to young people but he did not always keep himself safe from allegations. It is counterintuitive to risk an allegation like he did but contravention was never his ideology.

Much of the time he spent Winters between South Africa and Australia whilst being in Devon for the Summer months. We kept in touch over the phone and whenever he was back over here for the Summer we’d meet up for (more) tea and either watch a game from the Old Pavilion or net at Taunton. He often said that he rued the change in pavilions because ‘the only time we ever talked was in the bath there’. I felt that comment expressed a drive for a climate where men could express their internal landscape without fear. Its hardly surprising that male suicide is at epidemic levels.

We had very similar values, if not backgrounds. I think he was often intrigued as to how we got to the same place from different axes of opportunity. Around the trial we talked about the trauma of being in a state of suspension but that much of it was down to not being in control and feeling unsafe. He was open at times about feeling ‘melancholy’ for which I interpreted as depression but felt he was remarkably emotionally literate given his parenting and subsequent career choice among alpha males conditioned to avoid emotion.

I have read much of the various hypotheses around Peter’s demise and am sadly never surprised at how far from the truth much of it is. I know for example that he had a long-term female partner in Sri Lanka. I used to tease him because he had her framed picture next to his bed seemingly forever. He cherished the country for producing ‘a woman who still wants to look after a man’.

I also played rather a lot of Devon mid-week cricket with Conrad Sutcliffe the local cricket correspondent who Peter did not speak to for over four years due to Mr Sutcliffe breaching Peter’s confidentiality. It has been subsequently reported that the two were ‘close’ or ‘knew each other well’.

We often spoke about how certain individuals had hired private detectives in an attempt to discredit him. Mr Sutcliffe has been approached by numerous red top reporters for salacious material without providing information or being able to. Peter felt that living with this was the price of integrity. Better to be the person who stands up and be shot at than say nothing at all. I admired him for this.
P Duke

Thank you for hosting this fascinating insight into PR. Never met the man, but he was by far my favourite cricket comments person (written and radio), his intelligence, thoughtfulness and interest in the world outside cricket’s bubble made him unique.

Every season I miss his contribution to cricket’s dialogue here in Australia. I’m hesitant in saying I was devastated by his passing, but his missing presence in cricket (my religion according to my wife) continues to upset me to this day. Just wanted to say that.
M Harris

Peter Roebuck in the commentary box. 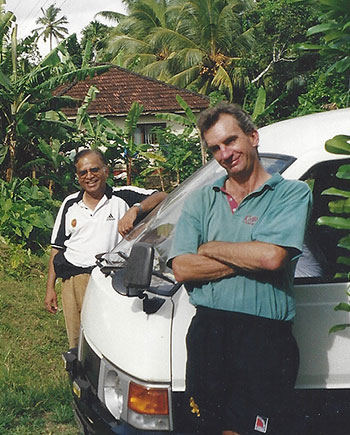