A strong partnership between Ricky Ponting and Matthew Hayden was the highlight of a patchy Australian innings that began brightly and ran out of steam on a holding surface.

The second wicket pair took the score to 1/170 whereupon the innings fell apart in the most abject manner as a changed and unconvincing middle-order failed to take toll of a nagging attack dependent on its slower members.

Andrew Symonds and even Cameron White were missed. Their replacements pottered about unimpressively as England clawed its way back into the match. None of the later batsmen showed much gumption. Australia’s later batting lacked power, conviction and common sense.

Ponting and Hayden put the Australians into a position to reach an intimidating score on a pitch that did lack sparkle.

Doubtless they will curse themselves for omitting to complete the task they had begun but risks must be taken in this form of the game besides which it can be hard to work out the sort of total that is required. 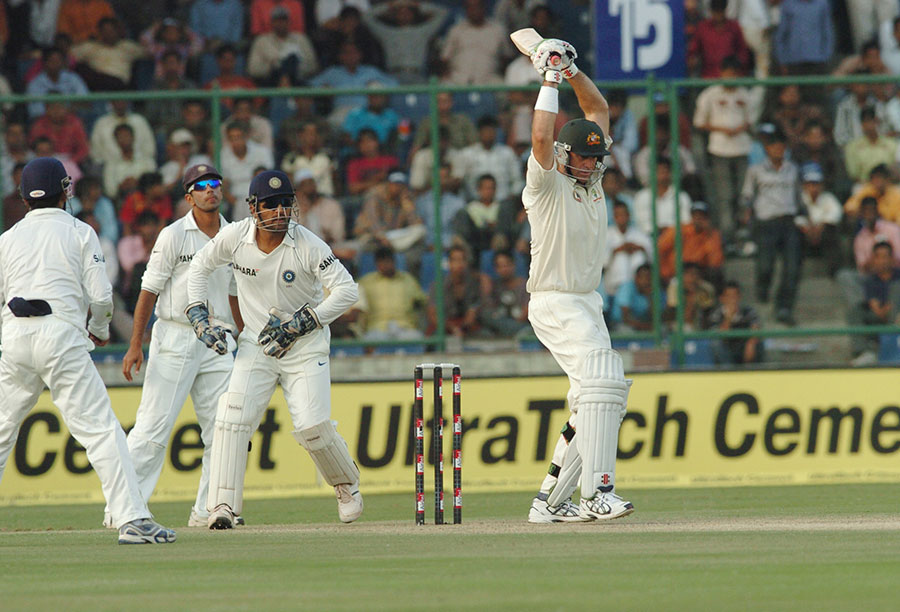 Matthew Hayden of Australia in an action during the 2nd day of the 3rd Cricket Test match between India & Australia at Ferozeshah Kotla Stadium in New Delhi on October 30, 2008. Photo: Public.Resource.Org/flickr.com

On tracks lacking pace it is also difficult to maintain a constant momentum, especially once the field has been spread and accurate slow bowlers are casting their spells. After an early wicket had fallen, these seasoned campaigners asserted their domination before consolidating and latterly cutting loose.

It took tidy work from England spinners to separate them. Once they had been parted, England fought its way back into the contest as Monty Panesar and James Dalrymple wheeled away cleverly in a combination that frustrated the highest ambitions of the home line-up.

Once wickets started to fall, Australia could not find a man resourceful enough to sort out the mess.

Part of the reason Hayden and Ponting bat well together is that they set bowlers radically different challenges. Hayden is an upright, muscular batsmen with a limited range of shots. As a rule he takes time to settle, likes to assess the pace of a pitch before unfurling his booming drives.

Whereas some batsmen can score runs off almost any offering, with well placed defensive shots or by dropping the ball at their toes, the Queenslander relies upon the succour of early boundaries. He relies more on forearm than wristwork.

Alas fifty over cricket does not always grant batsmen the luxury of time to reconnoitre. Hayden has been around a long time and is aware of his vulnerability. Anxious to impose himself, worried about his productivity, he is not happy till the fieldsmen have been forced to turn and chase

Here Hayden opened his account with a succession of scorching drives that pierced the gap at extra-cover. England had placed its field deep and straight and set out to keep a full length. It was not  bad tactic.

Bowlers regularly dispatched square of the wicket seldom last long in this form of the game. But the bowlers went too far, inviting the drive rather than defying it. Hayden took up the challenge and put the ball  away with command and precision. Within a few overs he looked comfortable at the crease.

At the start of his innings, Hayden may lack the creativity detected amongst the most fertile but once he is underway he is hard to stop. Before long he was driving the bowlers powerfully. When England reinforced the extra-cover region he opened the face of his bat and glided the leather away through point.

Facing the spinners, and finding that his broom was not working well enough to render the sweep effective, he started to collect off his pads. Taking advantage of England’s second power play, he produced several lofted drives second power play. It was a well constructed innings notable for its shot selection and alert running between wickets.

Ponting scores all around the wicket and has an ability to adapt his game to any surface, bowling or field placements. Fortunate to survive a first ball that lobbed from blade towards gully, he was soon directing operation soon the field. His ability to flick straight deliveries past mid-wicket forces bowlers to aim wider whereupon the Tasmanian penetrates the off-side with competent drives. He score off most deliveries he faces and knows that placement is as important as power.

Ponting played some superb strokes, none better that an exquisite glide behind point and two lofted drives executed with superb control. Spotting that Panesar’s mid-on was lingering on the edge of the circle, he stepped forwards and in his matter-of-fact way bunted the ball over his head.

Hereabouts it seemed that Australia must pass 300. Then the wickets started to tumble as Ponting and Hayden were caught in the outer. Thereafter the innings fell into decline as the limitations of the new middle-order were laid bare.

This article was written for The Sydney Morning Herald.
No ratings yet.
Hair Today, Gone Tomorrow
Aboriginal Cricket on the Rise