The difference Warne and Dhoni have made to their sides proves that captains are paramount, even in the shortest format.

Captains run cricket teams. It’s an old adage that has not lost any of its force. Cricket is different from other games. Rugby, hockey and soccer players spend most of their time in the rooms or the training paddocks. Matches take three hours a week, often less. The captain is usually caught up in the thick of the action, and his role is mostly inspirational. Tactics, substitutions and injuries can more easily be assessed from the edge of the field, where the whole picture can be seen. Strategic decisions are taken before play begins.

Sir Alex Ferguson, not Rio Ferdinand, packed his midfield with hard and fast runners against Arsenal, the better to disrupt their smooth passing game. John Plumtree, not John Smit, decides whether the Sharks will play an expansive or tight game against their next Super 14 opponents.

Cricket does not, cannot, work along those lines. The field dominates, days are spent in sporting conflict. Holding the team together, responding to a sudden attack, setback or opportunity, requires a hands-on approach. Captaincy by committee does not work. A hundred decisions are taken every hour. It’s more like skippering a racing yacht, always watching for changes in the elements, always knowing that hesitation is fatal, judgment paramount, always looking far ahead and yet also remaining in the moment. 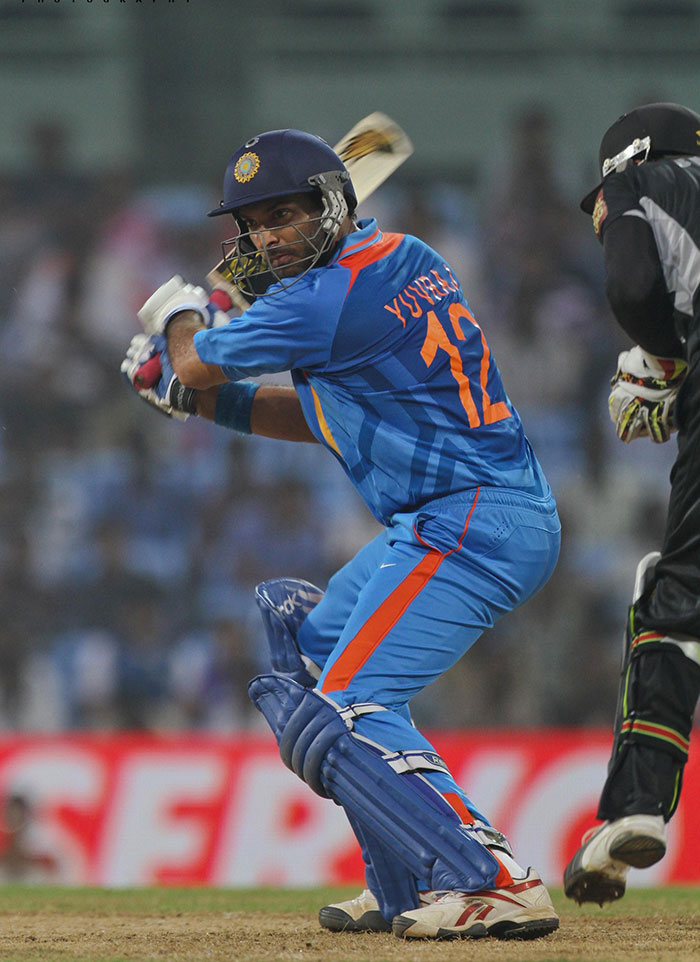 As they walk onto the field, captains examine the shape of the ground and the size of the boundaries, as these affect the positioning of fieldsmen. Taunton’s straight boundaries were short, so long leg and third man tended to be placed a few yards finer. Captains will also consider the wind. That affects the choice of ends for each bowler. Sometimes they all want to operate at the same end, whereupon the leader must persuade one fast bowler that he will be able to swing the ball more against the breeze, or that a strong man is needed to work into the gale, or that he will get a crack with the typhoon at his back at the next opportunity. Captains are part-time salesmen. And all before a ball has been bowled.

Thereafter it is a question of using eyes and ears and remaining aggressive. It’s a waste of time placing short leg and silly point for batsmen playing in front of their pads. It’s worth watching bowlers walk back to their marks. Some plod perennially, others are heavy-footed only when strength is waning. Captains determine the length of spells, the style of bowling, always seeking the right balance between attack and defence.

Everyone has his own style. Some stick to their plans come what may. When it works their calmness is praised; when things go wrong their lack of imagination is condemned.

Others are more instinctive, regard the field not as a blackboard but a battleground. They must be able to carry their players with them, for intuition can take a man down some blind alleys. Only the mightiest of leaders can swiftly separate their brilliant ideas from their flights of fancy. But time is of the essence. The un-seized moment does not come back.

As far as captaincy is concerned nothing has changed since the game began. Although top teams are these days surrounded by specialist coaches, shrinks, people to warn about the perils of chocolate cake, and those assigned the task of keeping the shutterbugs happy and the wordsmiths sweet, the captain is in charge.

The IPL has reminded all and sundry that captaincy does not begin with the first ball or end at stumps. Sometimes that is the easy part.

Cricket remains a battle between bat and ball, with the tacticians directing operations in the manner of chess players burdened with live pieces inclined to argue now and then and drop catches. According to the laws of the game the captain, and no one else, is accountable for the conduct of his players. He is also responsible for morale and results. To that end he tries to keep his side going forwards, tries to retain intensity. Adopting Dylan, captains know that a team is “either busy being born or busy dyin'”.

Modern captains tend to be more diplomatic than the old-school ones. Brian Close, captain variously of Yorkshire, Somerset and England, had many virtues, but no one ever considered him a candidate for ambassador to Moscow. After every day at Devon, I used to buy a jug of beer and give a pint to all comrades harangued during the day – luckily they make big jugs thereabouts.

The notion that teams cannot be driven hard is as footling as the suggestion that players cannot cope with rough tongues. Tact is an asset, but the will to win is paramount. Man management and sensitivity are overrated.

Likewise technology can help to inform the captain. Computers can be handy because they offer facts and figures. It’s easier to convince a steaming bowler that he has been dropping too short with a chart proving the point. Television uses this device to good effect. Studying the marks on the pitch works but is not always possible.

Video of opposing players can also be informative, though it is not half as effective as actually facing a fellow. After all, batsmen need to be certain about a googly or slower ball before committing themselves, and that requires eagle eyes and a convinced brain. In any case, the captain’s main task is not to worry too much about the opposition but rather to get the best out of his own players.

Like most cricketers, I played for successful and losing sides. The latter had far more meetings. The former tended to back themselves and their captain.

Not the least significant contribution made by 20-over cricket has been to confirm that captains remain influential in even this abbreviated version of the game. It might have been supposed that these activities require little thought. Not a bit of it. As much as anything, the IPL has been a tale about the rise and fall of captains. Indeed it has re-emphasised their importance. Thanks be given.

The IPL has reminded all and sundry that captaincy does not begin with the first ball or end at stumps. Sometimes that is the easy part. Against the odds, Shane Warne and MS Dhoni took their teams to the first final and now both have put their hats in the ring for the second instalment.

Meanwhile, profligate Kolkata, with its several contenders and uneasy alliances, flounders at the bottom of the table. Among the rest, Delhi Daredevils seem well led by their opening batsmen, Anil Kumble has rejuvenated Bangalore by sheer force of example, whilst Yuvraj Singh’s Kings XI Punjab flatter to deceive. Sachin Tendulkar has led his Mumbai outfit with aplomb. At first Adam Gilchrist‘s Deccan Chargers responded to their leader’s relentless cheerfulness, but it’ll be interesting to see how long it lasts. Kevin Pietersen’s stint as captain was brief and unsuccessful, partly because he was an IPL novice, partly because he has not found his feet as a 20-over batsman, and partly because his leadership is assertive as opposed to astute.

Rajasthan and Chennai have prospered because they have clear lines of authority, consistent plans, and place trust in their appointed leader. Warne was not merely asked to captain his side, he was given carte blanche. Historically and temperamentally it was a smart move. Accordingly he was able to build Rajasthan by his own lights, hand-picking his assistants, sending his old pal Darren Berry around India to look under stones and bushes in search of unsung and cheap talent, inviting Jeremy Snape to give his quiet guidance, and allowing others he respected to join him in the endeavour. He chose his players, shaped his side and formulated policy. Too many cooks can spoil the broth because everyone wants to put in his own preferred spice.

Typically Warne’s team has lived on its wits. He is in charge; the players look towards him for leadership, advice and strategy. It is a simple operation, and it works. Ego has been buried. By no means is it the only way for captaincy to work – only the most arrogant leaders think theirs is a blueprint. But Warne has been honest and his players know where they stand. For all his foibles, he has been Australia’s lost leader.

Dhoni has been himself. His approach lies midway between Warne and Kumble. Like the Aussie, he shows faith in his players, is able to think and act on his feet, and does not panic or concern himself with appearances. Like the mighty Indian he is a warrior, unyielding, prepared to hurl himself into the fray. Plain and simple, Dhoni is able to focus his entire character on winning the contest, a task he goes about in a notably unemotional way.

While not exactly a sphinx, he does not give much away, does not react when things go awry, does not glare at blundering fieldsmen or reel at the sight of a long-hop. Instead he seems able immediately to think about the next ball. He is a constant and remarkable man, able to allocate his time and energies so that the field does not drain him, for upon departing he can switch straight into another world. Captaincy will not break him. Dhoni has exceptional clarity of thought. Knowing its leader, his team responds with equal determination, and afterwards relaxation.

In their contrasting ways Warne and Dhoni continue to cajole the best from their players. With a rare mixture of cunning, loyalty, bluff, intelligence and grit, they have carried their players along with them and formed a winning habit. By doing so they reinforce the old truisms about the supremacy of cricket captains. The good ones can make even 20-over tournaments bend to their wills.

So far, none of the others has quite reached their standard. They remain the benchmark. But then, they were chosen and empowered by owners aware of the importance of having the right man at the helm. Temporarily, anyhow, a good captain can sharpen the fangs of any team.

By the same token, weak, selfish or boneheaded leaders can spoil a side. None of the IPL captains fits into that category. Even the least are honest and capable. Just that the competition is hot.

It’s been an illuminating fortnight. Everyone already knew the part played by captains in Test cricket. As much has been recorded and celebrated for 150 years. The IPL has shown that captains matter just as much in these brief forays. It is a comforting thought, and a point in the adventure’s favour.

This article was written for ESPN cricinfo
No ratings yet.
IPL is a Mixed Blessing
The day Mitchell Johnson destroyed South Africa at the WACA and made the cricketing world sit up and take notice